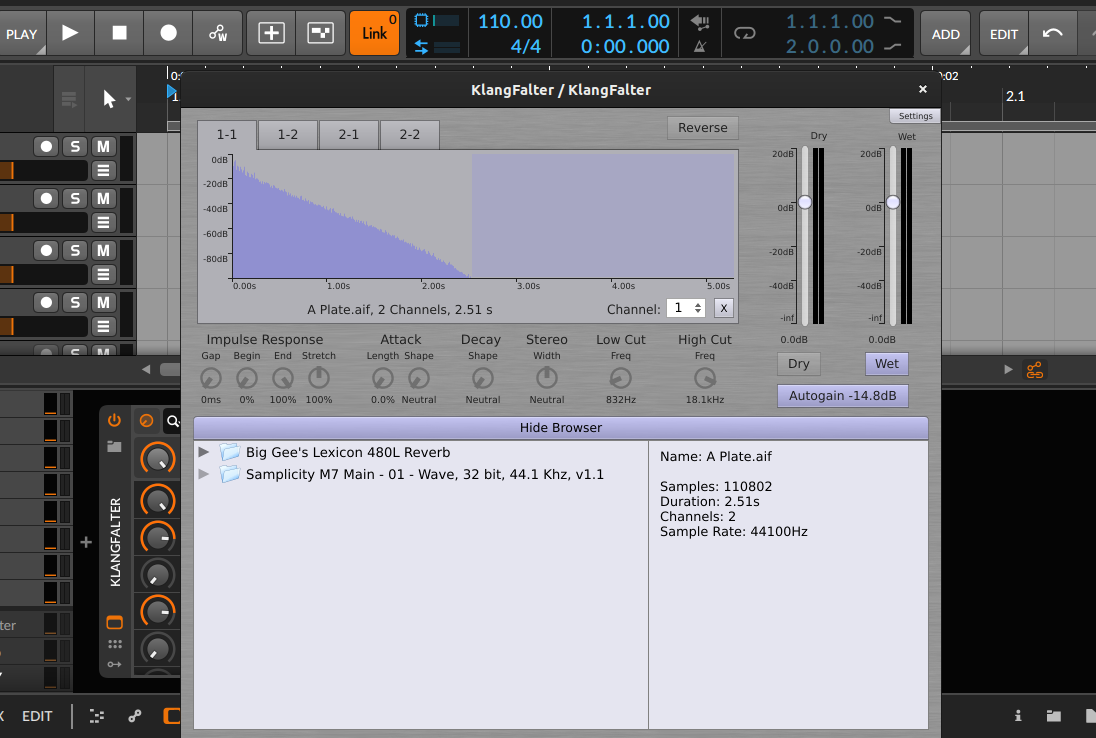 Convolution Reverb is a type of reverb that digital samples a real space or piece of equipment and turns into an “impulse response” which can be used in a Convolution Reverb plug-in in your Digital Audio Workstation (DAW) to create convincing ambience or special effects for your music or sound design.

Some popular Convolution Reverb plug-ins are Space Designer in Logic Pro and the Waves IR-1. The cool thing about impulse responses is you can record them yourself with any speakers and a microphone. I’d like to experiment more with this as you don’t have to just sample real indoor and outdoor spaces (though my mum’s bathroom does sound great on vocals). You can sample pieces of equipment, say a really fancy expensive reverb unit in a studio you briefly have access to. The possibilities are there for lots of fun!

As you may know, I’m a big open source software advocate so I am seeking ways to make music with such tools. Open source software is not only developed for the good of all, it’s usually also free as in cost which makes it great for people on lower incomes.

I found a great open source convolution reverb plug-in called KlangFalter. It’s made by a developed called HiFi-LoFi and I installed it via the amazing KX-Studio repos for Debian and Ubuntu Linux.

It comes in VST or LV2 format and has a great user interface that gets the job done and feels like a pro tool (no pun intended). It doesn’t come with any impulse responses however, which is a bit of usability problem.

You can however easily search online for “free convolution reverb impulses” and you will find a ton of stuff out there including professionally commissioned impulse responses (IRs) from the likes of Waves (but where’s the fun in that).

The IRs I found and am actually using at the moment aren’t even samples of real spaces. They’re from a cool old school websites called housecallfm.org. Now I don’t generally recommend downloading randoms zips off random websites but in this case it was fine. I know these IRs aren’t technically licensed but I suspect we can assume them to be public domain.

About 12 years ago I sat down and recorded a complete set of impulse responses from the legendary & industry standard Lexicon 480L digital reverb unit. The reason for doing this was so that I could have a “virtual” 480L inside the box in my Pro Tools rig via Audio Ease‘s excellent Altiverb plug-in.

Damn, they sound so good. You just unzip them, pop them somewhere on your filesystem and then navigate to them in your KlangFalter plug-in. They sound sweet and lush and stand up to any emulated version of that Lexicon unit I have ever heard. They can sprinkle that high end studio sound over your recordings if used strategically.

Now if anyone knows of an open source tool that they use for recording impulse responses, please get in touch.

2 thoughts on “Open Source Convolution Reverb On a Budget”